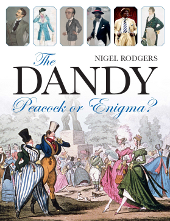 What is a Dandy?

For more than two hundred years the Dandy has enthralled and baffled the world. Is he a poseur or a philosopher? A sybarite or an ascetic? An aristocrat or a democrat? A peacock or an enigma?

For Carlyle, the great Victorian puritan, the Dandy was simply ‘a clothes-wearing man, a man whose trade, office and existence consists in the wearing of clothes.’ But this says very little about Brummell, the first and supreme Dandy, or about his successors.

‘A Dandy does nothing. To be a useful sort of man has always struck me as something utterly hideous’. The words of Baudelaire, poet, Dandy and visionary, are far more revealing. ‘There are only three types of people who deserve respect: the priest, the warrior and poet,’ he declared. Elements of all three can be glimpsed in the Dandy, who created from them something utterly new: himself.

Brummell invented a new paradigm of courtesy, wit, independence and elegance to lord it over the aristocrats of England. Dukes and princes trembled at the censure of this man whose ancestors had been servants. ‘Call that thing a coat?’ he said to the Duke of Bedford, and the richest lord in Britain slunk away to dispose of it. Brummell’s own style was radically simple: a few colours (blue, buff and white mostly), pristine white linen, a perfectly cut coat, no jewellery, no perfume. His was a revolution as great as the French Revolution that preceded it.

Dandyism has taken many forms, from Brummell’s classic severity to the outlandish clothes of Barbey d’Aurevilly, the first man actually to write on dandyism. Few incarnations have been more colourful than the yellow, green or purple suits – worn with highly polished shoes and immaculate ties – of the Sapeurs, the ‘Gentlemen of Bacongo’. Their recent emergence on the banks of the Congo in one of the world’s poorest areas reawakens the ‘heroism of modern of life’ for which Baudelaire long ago called. And the call has been taken up in England again by The Chaps, who confront the loutishness of the age with a wit, courtesy and elegance that seemed to have vanished from the earth.

The Dandy remains a paradox. Is he just a peacock, as his enemies allege? Or does his ‘eternal superiority’ – Baudelaire’s words – conceal a more intriguing enigma?

Reviews of The Dandy

Do we need another book about dandies? Having read The Dandy: Peacock or Enigma? I think we do, or at least did. Although there have been countless books about dandies over the centuries, not one of them is comprehensive enough to cover all the relevant historical periods right up to the present day, while also giving serious thought to the philosophical side of dandyism. This one does just that … If one wishes only to have a pair of tomes in one’s library  on dandyism, one of them should be Barbey d’Aurevilly’s Du Dandyisme et de George Brummell, the other should be this. —The Chap Magazine

One of the best titles released on the subject.   —dandyism.net

A lively account of the dandy and his historical career. From the French Revolution to the 21st century, these well-dressed eccentrics have survived and often thrived. Rodgers is keen to give the dandy his due. He is no ill-equipped fop but a culturally significant civilising factor. Over 11 chapters dandies are introduced and examined. From Beau Brummell and Disraeli to the stars of Hollywood; from Coward and Waugh to the modern incarnations of the role. The elusive spirit of the dandy is netted here and explained in deft but fair style.          The Field