THE COLOSSEUM — Haynes Publishing May 2018 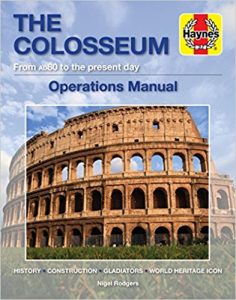 The Colosseum in Rome overawed the world when it was inaugurated in 80AD. It continued to awe visitors even as a ruin in the Middle Ages and Renaissance, and still does so today. While it remains Rome’s greatest landmark, an unfailing magnet for millions of tourists, it is also a brilliant example of Roman technology at its most sophisticated, a smooth-running machine in stone, cement and marble. Inside it  the city’s lavish and brutal entertainments were staged for centuries. The Colosseum, a vividly illustrated guide-cum-history, investigates its construction, its workings and its checkered history, including the recent triumphant part restoration. It shows how this archetypal amphitheatre influenced all subsequent arenas around the Roman Empire as well as many more recent buildings. One  chapter explains the central role its games played in the life of the ancient city, another the brief if sometimes glamorous lives of the gladiators themselves. Further chapters outline how the massive structure survived centuries of earthquakes, fires, depredation and neglect after the fall of the Roman Empire, and its  later roles as palace, fortress, church, tenements, site of black magic and botanical gardens. There is also a guide as how and when it is best to visit, avoiding the hottest, most crowded times. 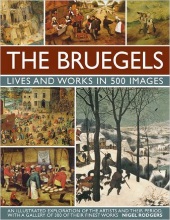 Peter Bruegel the Elder was one of the world’s most original artists, painting in a style that is still instantly recognisable. His finest works remain among the most popular of all paintings. They include Landscape with the Fall of Icarus, Hunters in the Snow, The Wheat Harvest, Peasant Wedding Feast and Census at Bethlehem. Bruegel founded what became a dynasty of painters, his sons and grandsons continuing his style long after his death, often with only minor variations. Yet about the man who created such powerful and moving works, oddly little is known.

This book argues that that noise is a major social, cultural, environmental and health issue. Across the world, more people are disturbed by noise in their daily lives than by any other pollutant on Earth. From the shanty towns of Mumbai to the boulevards of Paris, noise is damaging people’s health, costing billions, and threatening the world’s natural sound systems.

Understand Existentialism unpacks the heady mix of self-affirmation and despair that created the most popular and influential philosophy of the 20th century. The first major philosophy to inspire – and to be influenced by – writers and artists, it appealed as much to people in the cafés and streets as those in the lecture halls. Among its key figures were Simone de Beauvoir, a pioneer in feminist thinking, and Jean-Paul Sartre and Albert Camus, both great novelists.

The Rise and Fall of Ancient Greece — Lorenz Books March 2009

Do you prefer anarchy to monarchy? Democracy to tyranny? Athletics to aesthetics? Physics to philosophy? All of them Greek words, for concepts the ancient Greeks pioneered. Read how and why the Greeks were the first in so many things that still matter. The book covers all ancient Greek history from Minoan Crete to Cleopatra.

Arches, aqueducts , amphitheatres, arenas, palaces and sewers – all are there. With a quick guide on how to tell Ionic from Doric columns, and a survey of the empire’s greatest cities from Pompeii to Petra, from Trier to Palmyra.

The entire sweep of Roman history – everyone from Julius Caesar, Cicero and Caligula to Hannibal and Attila the Hun, covering all aspects of life in Rome, from gargantuan dinner parties to sex and slavery, from military conquests to mystery religions. The publisher’s website is at www.annesspublishing.com.

A survey of the world of imperial Rome, covering everything from baths to religion, from literature to travel, from technology to sport.

A vividly illustrated guide to the places you should see before you die.

Incredible Optical Illusions or: You should never (wholly) believe your eyes — Simon and Schuster 1998